Over the Thanksgiving weekend, Virginia and I went up to Seattle to see the family and I decided to run the Amica Seattle Half Marathon in order to manage the overeating of the holiday. This was to be my second half marathon and only two weeks after I completed the 60 day Insanity program. We arrived in town six days before the race, had a fun Thanksgiving, went snowboarding, and picked up my race packet and map. Anyway, this post is entitled The Importance of Preparation and Vaseline so let’s go ahead and embarrass myself for the sake of future education.

For those who don’t know 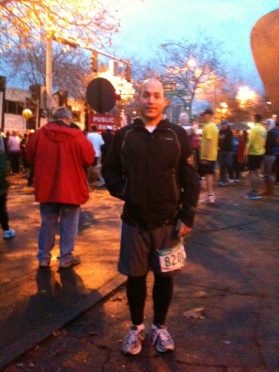 the area, Seattle is very hilly and very wet so for a race such as this preparation was key. Coming from Southern California and only racing in LA I had only run in 50+ degree weather, so I showed up with a cut of technical tee, 6-inch shorts and a light jacket. After my first practice run in sub thirty degree Seattle rain I realized that the clothes I brought were just not going to cut it. The next few days were spent driving around trying to find some better clothing for me to wear (Thank god I had my snowboarding gear to awkwardly get me through those days). The best we could do were my first pair of running tights from the third store we drove to. The unsolvable problem was that my shorts had an internal lining that did not fit well over the tights so it caused there to be a little more chaffing than in desirable. Let’s not talk too much about that but I will leave you with the comment that it did not turn out well. To the left is a picture of my pieced together outfit for the race.

We arrived bright and early on the day of the race thanks to a ride from my brother and I started to get ready for the race. As we walked up to the starting line there was a booth with Vaseline covered slips of paper and a box of safety pins. I thought about grabbing the Vaseline at that time but I also needed to pin my number to my leg. I grabbed four pins and said to myself that I would come back for the chaffing assistance. After spending some time pinning my number, stretching, and standing in the long line for the porta potties the start time was almost upon us. I tried to get back to the table with the Vaseline but the crowd was too think so instead I rationalized. “I didn’t need it for 13.1 LA so I’ll be fine, screw it”….big mistake.

I said goodbye to my support team (Virginia and my mom) and got in the corrals. This was where my lack of planning for a hilly run came into play. I picked a slower starting pace 2:15 because I thought I could do a slow speed build and still end under 2:00. As soon as the starting gun sounded the sky opened up and it poured for 4 hours straight (At least I only ran the half). The first mile was OK but then I started feeling a weird sensation under my right foot every time I stepped down. Now this was not pain, it was something in my shoe or as it turns out under my shoe. I stopped to look and, of course, a part of my shoe was peeling off. Now every downhill stride the rubber would fold under itself and make the step awkward. Thankfully the uphill parts were fine.

Overall the race was really cool, beautiful views of the city, terrain transitions from city to highway to woods and a lot of rolling hills. One highlight was that they closed part of what I think was the 5 and we ran on an actual highway even through a tunnel. That was a first and pretty cool. My plan to start slow and have a slow build was just plain wrong. I realized that when I hit the first mile of uphill climb and spent the rest of the race playing catchup. One funny note was that at the halfway point, Virginia called me asking if I was finished. I replied with “No, a 1:08 half marathon would be cool but highly unlikely”. Apparently the tracker app was not worth the 99 cents and told her I was finished. Another great thing was that they had GU gels throughout the race which kept my energy up.

The biggest incline was the first half of the last 5K but I was determined to go faster. I started playing a game where I would look 100 feet out, pick a person, and pass them. Each time running a little faster. By the last mile I realized that a sub 2 hour may not happen but I was still going to try. We were all downhill by now so I started sprinting. I was running on the wrong side of the road, yelling at people to get out of my way, and just being an overly unpleasant person with a goal in mind. With a half mile left I finally paced the pace runner for the group infront of mine and just kept going. I finished at an all out sprint, when you look at my splits I ran that mile in 6:45 but it was too little too late. I finished the race in 2:04, feeling like I could have run more which means I did not run hard enough. Oh well, now I know what this race looks like when I run the full marathon here in the future.

Since it was still pouring we decided that hanging around was not ideal so we headed over to the McDonalds where I got a victory egg mcmuffin (Yes it was only 10am!). So you are probably wondering “He talked about Vaseline a lot in this post, I wonder why”. Well I will tell you why. During the race my pectoral region started to hurt a bit (Yes, my nipples). The combination of rain, t-shirt, and jacket were just too much without some petroleum jelly. After a while though the pain subsided and I thought we were good to go. That is until I took off my jacket at breakfast. The look of shock from my support staff was enough to make me concerned. It turns out that the pain stopped because my body realized that a good substitute for Vasaline was my own blood. The red streaks down the sides of my white shirt spoke volumes and I zipped back up pretty quick. The pain for the next few days was also pretty awful so I am now the poster boy for nipple protection.

As I said in the title, preparation and Vaseline are key components to a good race. The Amica Seattle 13.1 was a lot of fun and a beautiful race but not for the faint of heart. I will leave you with the most embarrassing picture of my short racing career and hope I inspire you to race smarter in the future.

View all posts by Steven Lerer

4 thoughts on “13.1 Seattle: The Importance of Preparation and Vaseline”