In April of 2015 it was time to begin serious training for the Ironman Vineman that was to take place on July 25th of that same year. I had done two triathlons leading up to this event, one Olympic distance in 2013 and one Half-Iron in 2014 but nothing could prepare me for the massive amount of training that would take place over the next sixteen weeks.

For the first two triathlons I created my own training plan based off of a little research and some assumptions on how far I would need to be able to go in each sport to survive the race distance. I had also incorporated weight training and insanity workouts into the mix just for good measure. For the Olympic race, this worked out well but it became readily apparent that I was not up to par for the half-iron distance. That race was the hardest thing I had ever done and I honestly thought I wouldn’t finish. When you are on the side of the road trying to fix a flat tire with hands shaking from the onset of heat exhaustion, you come to the realization that you do not know what you are doing and need some expert help.

For the Ironman I knew I should find a training plan that could help me finish and hit my goal time of approximately fourteen hours. Luckily the Vineman had a training plan designed specifically for the race by someone who had completed the race for many years. Upon opening up the first four weeks of training, I realized immediately how bad my self-designed plans really were. Here is a sampling of the revelations in training I discovered from this plan:

As a final note before I get into what it was like to train for this race it is important to say that proper gear is a must. I got a carbon fiber Cannondale, new racing gear, new shoes, a Garmin, and so much more. It was really costly (Though probably a tenth of what others spend) but all worth it to make the transition to Ironman.

Training for an Ironman, no matter how you cut it, is totally ridiculous. If I was single and worked a 9-5 maybe, but I was married, with one child, another on the way (Born now, hi Brianna!), in a job with long hours, and starting a PhD program. Not the best grouping of responsibilities to which to add fifteen or so hours of training. Luckily, it was quickly approaching summer, which meant slightly less intensity at work and warmth in the early morning hours.

The first four weeks were really the ramping up process so it was not too intense, only 4-5 hours of training on each Saturday and 1.5 on each Sunday, no biggie. Average of 13 hours of training each week. Even the 1.5 mile swim, 2.5 hour ride, and 1 hour run was manageable. Then I received the second block of the training plan. I had wondered in the beginning why the coach sent out the training plan staggered in blocks of four. Now I realize that it was a way to stop me from panicking and quitting had I seen the whole plan up front.

During the second four-week block of training things started to get a bit interesting. This was the time when I started to read for my first full week of PhD class and when the doctor told Virginia that she could no longer pick up our daughter. This meant that I had to be home as much as possible and had to substitute training during naptime for reading for class. All in all this materialized as waking up earlier, like 3:30am earlier for training. Weekends also started to get tough. Over five hours of training on Saturdays followed by two hours of training on Sundays start to take a toll on family life. It was not uncommon for me to need to shift things around in order to get Sammy to gym class or to meet a job commitment.

The worst was the five-hour full triathlon on the last day of the training block. Since I had to swim at the gym and then drive home to bike (Lest my bike get stolen) things were complicated by the fact that the gym opened at 6am on weekends. Why does it open that late on weekends? Good question. Couple that with closing at 8pm and weekend training is really hindered. This issue resulted in me biking an hour, swimming, biking, and then running. This really sucked but it was the best I could do. It was also around this time that I started burning through books on tape at a nice and expensive clip. Block two, fourteen hours of training each week.

Week nine of training began what we call the “Triathlon Widow and Orphan” phase of the Ironman experience. Average training time per week increased to sixteen hours and there were only so many hours before Sammy awoke and when I had to go to work each day. This also began the very apparent sense of solitude. I also had to randomly travel to a Risk Summit in Oakland so, my gear came with me. Walking through a hotel lobby with a bike over your arm surrounded by suited up professionals is interesting.

Once you pass over 4.5 hours of riding each Saturday you have to become very comfortable with yourself, especially when you are training for an Ironman all alone. The most ridiculous part of this stage of training was that I began to need to stop at home to replenish water bottles on every Saturday ride. You can only have so much water on the bike and 5 hours was my limit. There is also an alpaca farm at around mile 35, we have become friends. 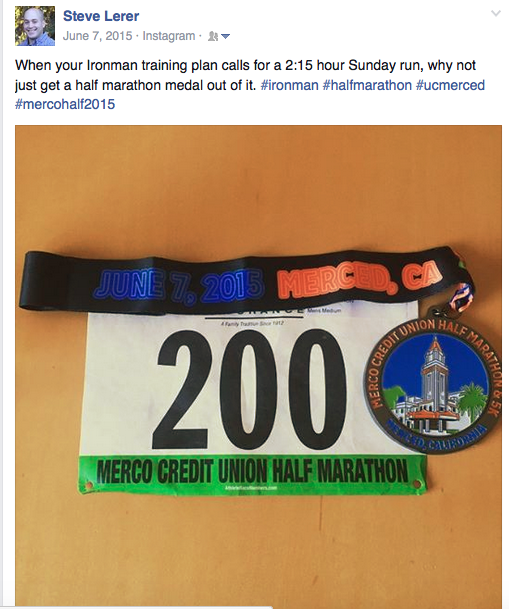 Week ten I hit 88 miles on the bike, which was a very interesting distance. This meant that I needed to start a second loop since my longest loop was 68 miles. It also meant that even though I would begin my rides at 4am I would inevitably run into the other cyclists in town as some point. There is something very satisfying about the look on their faces when they ask you what mile you are on and you reply with “Eighty” at around 9am. I was also reading a ton and basically had given up on balancing everything. My only recourse was taking Sammy along on some of my runs; the Bob Ironman stroller was a godsend.

The final practice triathlon in week twelve was the most intense of them all; in fact, it was a true Half-Ironman. This week was also the tail end of June and super hot. In order to make sure I was prepared for what was coming in four weeks, I did the workout in order, which meant I started at 6am and finished around 2pm. By 2pm it was 97 degrees out, which was both good and bad. Bad because I almost passed out from heat exhaustion, good because the predicted high for the race was 82 degrees. Let’s just say I had almost reached my breaking point.

Week thirteen was the peak and by far the most intense week. Topping off at seventeen hours of training, the only blessing was knowing that the taper would begin the following Monday. This was also the week I would leave for Colorado for my first class yet somehow I still had to get all my training in before leaving (OK, that didn’t work out so well). That weekend was when I realized how nonsensical training for an Ironman really is. I had to ride six hours and run thirty minutes on Saturday, but it was going to be super hot. My solution, just get up at 2:45am. 2:45!!! How stupid is that?

Anyway, I did it and then had to follow up with a 2:30am wake up the next day to go for 2 hours of the total 2:45 run. This is because I then had to catch a flight at 8am down in Fresno. And of course I picked up the last 45min that evening in Fort Collins in the pouring rain. Cause, why not?

Thankfully things began to calm down and that next week in Colorado I was able to get some elevation training in which would give me a big boost on race day but since I had no bike, I had to ride in doors. That is no fun, no fun at all. I’m pretty sure my cohort thought I was very strange since I would go swim most days at lunch and then workout 1-2 more times each day. But that’s ok; they know I am strange now.

The final two weeks of Ironman training are kind of odd. They are a mixture of rest, reconnecting with that family who forgot me, planning for the race itself (That is a whole other post entirely), being confused as to why I’m not running seven hours, and reading articles that tell me I am going to die during the race. Really, I searched a lot of articles and had numerous panic attacks in the final weeks. Luckily, I also had a paper due for school so that distracted me…I guess.

Before you know it, race day is upon you and you forget what you went through leading up to it but I still say that the training is what gets you, not the race itself. 240 hours, which is 10 days of my life, went to preparing for my first Ironman and I don’t regret it for a moment. 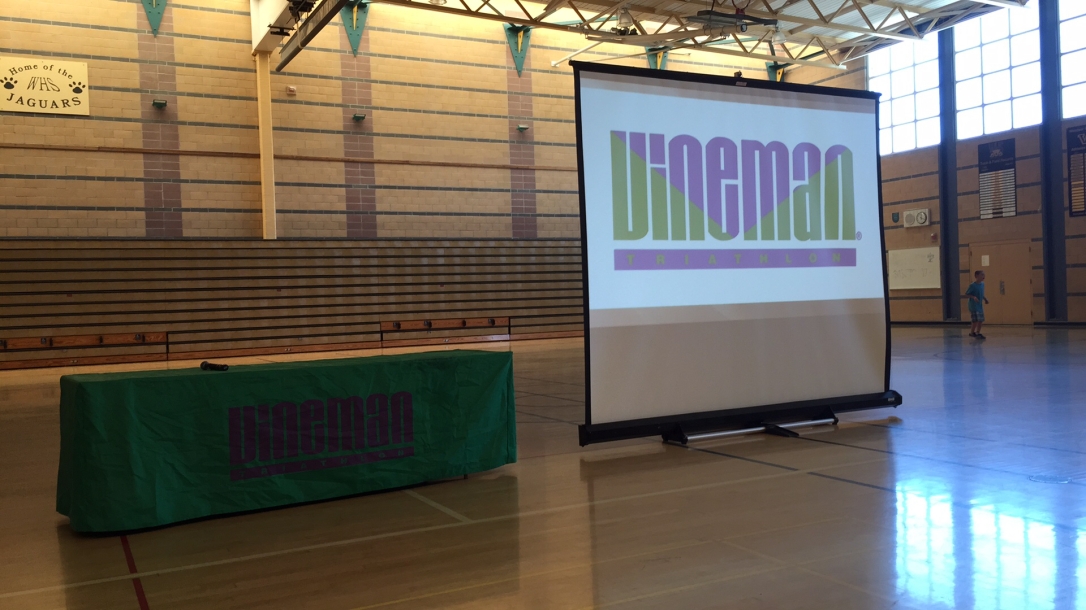 View all posts by Steven Lerer